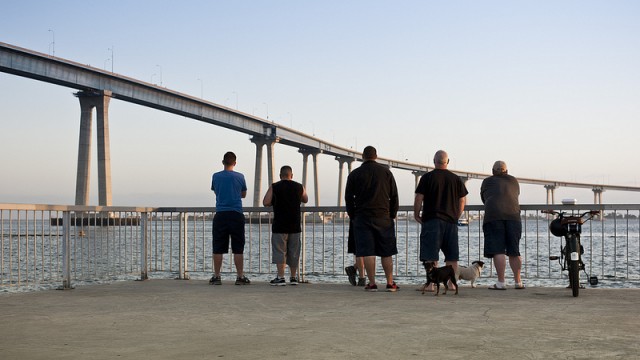 Summer solstice officially marks the first day of the summer season; and is honestly something which I overlook and forget every year. This year, however, will be a summer solstice that I will never forget.

On the way back home on the Interstate 5, I had noticed that the on-ramps to the Coronado Bridge were shut down by local Highway Patrol. Traffic had already begun and the freeway had quickly turned into a parking lot. As I thought of alternate routes to get home, I decided to take a break from driving, and headed to a nearby by pier to watch and capture some pictures of the sunset. At first, I didn’t think anything of what was occurring on the bridge. I had imagined that some type of construction was underway, but as I reached the end of the pier, I was abruptly greeted with horrifying news.

A young man who had seen me holding my camera quickly approached me on a skateboard and asked if I had gotten any good pictures of “him”.

“Who?” I asked as I began piecing together the situation at hand.

“The jumper” he replied.

For those who don’t know, the Coronado Bridge is notorious for hosting people who plan to commit suicide. It’s an occurrence which, unfortunately, happens all too often, and is difficult to prevent at the same time.

As I neared the end of the pier, a small group of naval officers and civilians had gathered along the waters edge, waiting to see if the man would jump. I could barely make out the profile of the man because he was so high up and so far away, but from what I could see, he began pacing alongside the bridge, paused to look over, and then began pacing again.

It was quite nerve wrecking to observe someone on the verge of ending their life, but a part of me wanted to stay just to say a little prayer for the jumper on top of the bridge. I had never partaken in a situation like this either, and there was an overall presence of sympathy on the small pier.

As I glanced around, I placed myself in the “jumpers” shoes for a moment and observed what was around me.

The sun was about to perform it’s magical show just behind the horizon, kids were showing each other their best skate tricks, and fisherman were enjoying the cool weather of the bay from their boats. It would have been a terrible day to end it all. I made my way back to the car not knowing what the outcome would be.

As I turned on the tv to watch the local news later that night, I learned that the “jumper” had turned himself in to local authorities after a six hour standoff. I was glad to hear that the man had lived to see another day.